Wilfrid Major Ltd. is a proud Canadian-owned manufacturer of livestock and poultry feed since 1959.

At Wilfrid Major, we are committed to providing the best service and nutritional advice to producers.

To serve and treat all our customers with the utmost respect,
and to provide quality feed and service like no other. 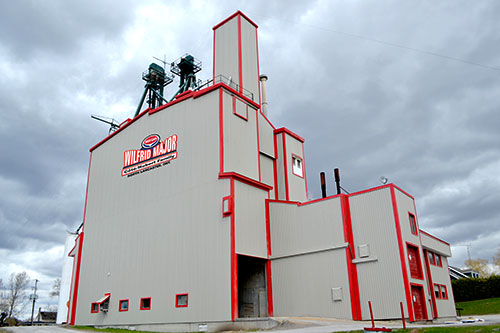 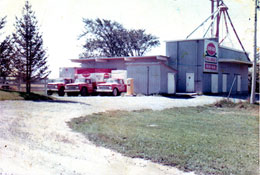 On August 18th 1959, Mr. and Mrs. Wilfrid Major, residing in Québec at the time, moved to North Lancaster and purchased the feed business from Mr. Donat Major.

Over the years, and after several renovations and upgrades, the Majors built what was to become a well-respected business. They continued to improve along the way, especially with the implementation of new technology. Upgrades to the installations included a new pellet machine and the installation, in 2001, of a fully automated batching system to ensure accuracy, quality, and compliance with all feed safety regulations.

Michel and Fernand Hubert knew that Wilfrid Major Ltd. had even greater potential for growth and, in 2009, they became the new owners while celebrating the company’s 50th anniversary. They retained all the employees – and hired some new ones as the business continued to grow under their confident leadership. The existing machinery was upgraded, and a new roller mill was added to allow the company to increase its production volume.

Since 2009, Wilfrid Major Ltd. has more than tripled production.
Even with all this growth, one thing remains the same… our goal: “To serve and treat all our customers with the utmost respect, and to provide quality feed and service like no other.”

Michel and Fernand Hubert, both greatly integrated in agriculture, are the owners of Wilfrid Major Ltd. since 2009.
They have extensive knowledge in the poultry, pork, and dairy industry.

Roxanne Lauzon has been with Wilfrid Major Ltd. since 1984.
She is responsible for daily operations as well as purchasing.
Contact Roxanne at 1-800-263-3211 for commodity prices.

Don brings extensive experience and firsthand knowledge to Wilfrid Major. He is co-owner of the 2× Master Breeder Herd Cherry Crest Holsteins, and his experience includes former chairman of the Glengarry County Milk Committee, former chairman of the Holstein Canada Research Committee, and past member of the Holstein Canada Type Classification Committee. Don has also judged Holstein shows in Canada and in 10 other countries.

Born and raised on a dairy farm, Sylvie appreciates and greatly respects the hard work involved in running a profitable farm business. Sylvie is a certified Dairy Nutrition Advisor (DNA). Her passion for agriculture is an asset to Wilfrid Major Ltd.

With a diploma in Dairy Animal Science from Kemptville College, Shirley has always been passionate about dairy cattle health.  She has valuable experience from previous employment, notably at a large animal veterinary clinic and a clinic doing embryo transplants.  Having grown up on a dairy farm and currently being involved in the family farm, she understands the obstacles dairy farmers are facing today. Shirley’s personality, together with her experience is a real asset for Wilfrid Major Ltd.

Jessica is a University graduate with a passion for agriculture. Her experience is multifaceted. Born and raised on the family poultry farm, Jessica started off on egg collector duty before being involved with flock follow-ups. She later went on to oversee the construction of poultry barns. She is pursuing a career in the agriculture industry, a field she is truly passionate about. We are very excited to have her as our poultry consultant.

Jakob grew up on a farm in Eastern Ontario before completing an animal science degree at Dalhousie University. Jakob is very knowledgeable, and his experience in agriculture and in the consulting field certainly is an asset to Wilfrid Major.

Our administrative support team is there to process your orders and manage your accounts.
Maryse is also in charge of Quality Control.

Marie-France has grown up on the family poultry farm in Western Quebec and competes in horse sports as a hobby.
She is currently completing the farm management and Technology program at the McGill Macdonald Campus.